Biotia, a startup offering microbial surveillance for hospitals, is a joint venture between researchers at Weill Cornell Medicine and Cornell Tech. Founded through the Runway Startup program at the Jacobs Technion-Cornell Institute at Cornell Tech, Biotia is led by experts in genomics, bioinformatics and applied evolutionary biology: Chris Mason, Weill Cornell Medicine associate professor of physiology and biophysics and of computational genomics in the HRH Prince Alwaleed Bin Talal Bin Abdulaziz Al-Saud Institute for Computational Biomedicine; and Niamh B. O’Hara, a researcher and startup postdoc at the Jacobs Technion-Cornell Institute. The Jacobs Institute gives financial and mentoring support to PhDs in tech fields who have recently graduated and are interested in launching a tech-related startup. Biotia has already received some funding and anticipates Series A funding in mid-2018.

On average, one in 25 people who check into a hospital gets an infection – and one in nine dies of that infection. For patients with compromised immune systems, such as cancer patients and the elderly, the rates are even higher. Biotia’s aim is to provide an ongoing service to hospitals: to swab and genetically sequence their high-risk environments, monitoring hygiene, identifying pathogens and tracking antibiotic resistance. Mason and O’Hara are collaborating to create high-throughput, sequencing-based microbial surveillance technology and software, and commercializing it with the goal of decreasing the number of hospital-acquired infections.

How did you both meet and become involved in this project?

O’Hara: It was about two years ago – Chris and I were both giving talks at a population genomics conference at the NY Genome Center. Chris gave an inspiring, engaging talk about the work he had been doing in the subway [creating a “pathogen map” of microbes and bacteria throughout the New York City subway system]. I had finished grad school and was doing a short postdoc, and I was looking for research positions, so I actually went up to Chris and asked him for a job in his lab. It coincided with my applying for the new Runway program at the Jacobs Technion-Cornell Institute, a business-focused, academic-business hybrid; they take people who just got a Ph.D., and they provide support for you to work on a startup.

I talked to Chris about my interest in business and using this concept of metagenomics – doing research similar to his subway study [and his related Global City Sampling Day]. We talked about different applications for that and came up with [the business plan for] an application in hospitals, and we basically proceeded from there.

Mason: Niamh was coming from this great background of evolutionary modeling, suggesting that we use some of the tools she’s created through her thesis work and methods in the field to model the movement of genetic material in a hospital setting – where you could actually study its evolution and movement just as you would a species in any environment.

We wrote the application to the Runway program with that approach, and I signed on as co-founder.

How have each of you been collaborating?

O’Hara: I have found a lot of crossover from my thesis work on plant evolution, but then, of course, there are also differences. As a grad student, I was working in California along the coast, sampling populations of plants, and now I’m working in a hospital swabbing toilets, so that’s slightly different. [laughs]

As a grad student, I was focusing on a specific plant, and the work I’m doing now is metagenomics. … When we sample, we’re collecting DNA from lots of different species all at the same time. It adds a layer of complexity to the analysis because we have to disentangle all those genomes first and identify what’s there. It’s computationally challenging.

Mason: Even though the subway study was a first snapshot of what’s in a city, it has opened our eyes to this invisible world around us. The study of DNA on surfaces with which we interact is as complex as the totality of Earth’s DNA. You have to catalog, map and characterize the movement and types of DNA and what they mean to accurately place their potential relevance for health and disease. So that’s a long-winded way of saying: it’s complicated. 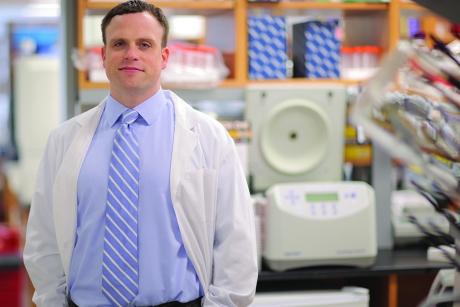 In my perfect world, if you could, you would look at a room and it would be like that scene in “The Matrix,” where he can see not just the world but also the code behind the world. In my world, you would open your eyes and you would see every single thread of DNA in the entire room and potentially where it comes from. … If you take a snapshot, if you do it enough times, then you can know what the migration patterns are.

That is the closest analogy, at least in popular culture, of what we’re trying to create.

Ultimately, what is the safest or ideal microbial environment in a hospital setting?

O’Hara: I have an evolutionary biology and ecology background, so I really think of it as all the microorganisms interacting with each other, and that this is the hospital ecosystem.

If you think about the subway study, they found that there is a ton of beneficial bacteria and neutral bacteria – and that’s a good thing, because that means those microorganisms are hopefully outcompeting the pathogens and that might help prevent the spread of pathogens.

Mason: It is, in some ways, a paradox. On the one hand, we’re telling everyone, “watch out for hospital-acquired infections, they can harm you and kill you;” but on the other hand we’re saying “don’t worry, most of the time it’s fine, and actually you need microbes, some very good microbes, to defend you.” So it’s not a binary “Do I need bacteria, yes or no?” The answer is: “Yes – but the good kind. And, also, try to avoid the bad ones.”

Theoretically, although it is not practiced in hospitals, you wouldn’t want to just kill everything; you wouldn’t want to bring a flamethrower to the hospital, because while that is one way to remove pathogens, that opens the room up to other organisms coming in that can then recolonize that surface and might be worse than what you got rid of. In a perfect world, the best idea would be to have a persistent and defensive living system that is your ally. Just like your own body is, with your immune system and your own microbial allies. In addition to our applied work, these are some research questions we are modeling.

What stage of development are you in, and what comes next?

O’Hara: What we’re providing for hospitals is surveillance of what’s going on in their environment, so that we can say, “In this room, on this surface, we found Staphyloccus aureus, and it looks like it’s antibiotic-resistant,” so that hospitals can then do targeted intervention – go in and clean that surface specifically and appropriately.

Right now, we’re working with two hospitals, a pilot project with NewYork-Presbyterian and another one with Memorial Sloan-Kettering Cancer Center. We are testing the products in the hospital, and we’ve built the metagenomic software to use in the analysis to identify what’s there, in regard to both species and microbial resistance.

We’re focusing on the pilot projects for now, and over the summer we’ll be putting out a beta version of the software.

Mason: Longer term, we are also working on the technological side to make the informatics even faster. The goal is, when someone checks out of a hospital room, within the few minutes that they’ve cleaned and processed the room to get it ready for the next person, we will have characterized the room and validated its safety. Or, we can also have it available for people who check in who are long-term care patients, the most vulnerable, so that we can monitor them … . We want to be able to make the data genesis and analysis as fast as the organisms colonize and evolve – which is continuously and ubiquitously.

O’Hara: We anticipate going for a seed funding round over the summer, to hire more people and optimize what we have been working on. We are aiming for a Series A round in mid-2018.

Mason: The thing I love about this company is that it’s the first company dedicated to this idea of rapid, adaptive and comprehensive monitoring of hospitals.

We’re both happy and proud to be working hard on this and staying up late at night on something that could save lives and make the hospital a safer place to be.

It is a balancing act – we don’t want to declare that a hospital is a dangerous place. But to pretend that hospital-acquired infections don’t occur won’t save anyone; to not monitor and defend against them would be irresponsible. So we’re going in the right direction with the technology, and the computational methods are finally at a place where we can actually do it. So it’s very exciting.

What support and resources do your respective institutions give you that neither of you would have had access to alone?

Mason: On this project, it is good to have Cornell Tech, which has a very strong engineering and computer science focus, join forces with Weill Cornell Medicine, which of course is much more medically focused but also has an entrepreneurship lab. It is a good match of backgrounds. And resources at both places so far have been wonderful.

From the beginning, we wanted to build the company to be cutting-edge – but you can never marry a technology because technology always changes. So you want to be somewhere between the leading edge and the bleeding edge, and that’s often where you not only discover new biology, but sometimes have the best ability to accomplish your goals. Which, in our case, is rapid diagnostics.

O’Hara: The Runway program provides a lot of business resources, so I was able to do a mini-MBA there; we take business classes with the MBA students. And we also have access to all the professors in the program; they have a network of investors, lawyers and just lots of connections in New York City. They set us up with mentors and go over each stage of setting up a startup, working through the business model, and doing customer development and all of that. So it would have definitely been much more challenging to transition into business without them. It’s really a great program.

AwareHealth, a Runway Startup at the Jacobs Technion-Cornell Institute, is a fully …
Read the story about Runway Q&A: AwareHealth