In recent years, YouTube has focused their safety policies on demonetizing creators that participate in off-platform behaviors or create content that may be considered harmful, even if they do not explicitly violate the platform’s rules. (Some examples include David Dobrik and Dan Bongino, the latter of whom was eventually banned.) However, a deep dive under the hood of the platform shows that these creators can easily use the platform to direct people to make money in other ways.

In a new paper, a team from Cornell Tech in collaboration with the Swiss Federal Institute of Technology Lausanne (EPFL) recommends that, if YouTube wants to truly impact these creators, they develop a shared database of demonetized users in conjunction with Patreon, Twitch, and other alternative monetization sites, to prevent them from using each other’s platforms.

The Cornell Tech team reviewed 71 million videos on YouTube that were published by more than 136,000 popular content creators with more than 10,000 subscribers to understand how creators, including channels that distribute problematic content, employ alternative monetization strategies that could allow them to circumvent the effects of any “demonetization” by YouTube.

In their new paper the researchers found that, when compared to random channels of similar activity, popularity, age, and with similar content fringe content creators are:

“We found that channels that establish alternative monetization strategies actually become more productive on the platform,” said Cornell Tech doctoral researcher Yiqing Hua, co-lead author on the new paper alongside Cornell Tech professors Thomas Ristenpart and Mor Naaman. A collaboration with Manoel Horta Ribeiro and Robert West of the Swiss Federal Institute of Technology in Lausanne, the paper will be presented this November at the annual ACM Conference on Computer-Supported Cooperative Work And Social Computing. 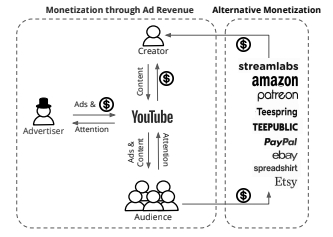 The researchers learned that creators who produce problematic content thrive from the attention they get from their supporters through alternative monetization. Looking at even just a small sliver of the overall YouTube analytics, Hua found that at least a dozen fringe channels have made more than $100,000 on Patreon alone.

While the problem is not limited to YouTube and Patreon, the two platforms have an outsized influence in this space. The new paper shows that 61 percent of fringe channels use an alternative monetization strategy, compared with 18 percent of channels overall.

“We were surprised to discover how much money these creators are making from alternative monetization platforms,” Hua said. “Creators make money on YouTube through engagement, including number of views and minutes watched, but fringe creators that are demonetized focus on ensuring their fans and followers want to support and pay for their work.”

However, the researchers suggested that alternative monetization should not be banned from the platform, as these strategies also empower creators who are often in a vulnerable position when YouTube policies become ambiguous. Alternative monetization also allows for different incentives that may encourage higher-quality content compared to the ad-revenue model.

This research was funded in part by the Siegel Family Endowment and by the National Science Foundation.